BY NADINE WILSON Career & Education reporter wilsonn@jamaicaobserver.com
WITH a wide assortment of cattle and exotic birds, an impressive greenhouse, acres of land boasting a variety of cash crops, a large orange orchard and luscious vegetation spanning as far as the eyes can see, Dinthill Technical High School in St Catherine is a farmer’s paradise, and an incubator for students who contribute to improving Jamaica’s food security.The school has over the years perfected the formula for producing well-rounded students who are academically sound and equally talented. Farming has been a part of this winning formula, and is not only the basis for studies, but an income generator for the institution as well.[slideshow id=4]Principal Lloyd Fearon said getting the students involved in agriculture is done with relative ease. In fact, tending to the school’s massive farmland, cattle and poultry is a welcome reprieve from theory-based learning within the classroom setting, and allows them to roll up their trousers, don water boots and overalls and prepare for practical interaction with nature.”Because agriculture is the epicentre of this institution and all our students are exposed to agricultural science, it’s easy to make this transition, because they see agriculture as a subject area and also as an income-generating entity. And so we don’t showcase or sell agriculture to them as just preparing them to become farmers, but we sell it to them as a science subject that will help them to matriculate to universities and to colleges, especially those persons who want to go into the sciences.”Fearon, who is one of the school’s past students, said agricultural science is seen in the school as equal to any of the traditional science subjects.

“Because it is practical, they tend to gravitate to it and just want to be involved in it, because they can actually see what they are doing,” he said.

“With agriculture itself, they can say ‘I planted this, I watered it, I watched it grow and now I’m reaping it’ and to some extent they partake of it when it is used in the lunch programme and some even get a sample to take home, depending on the quantity of the product that is produced.”

The school produces cabbage, carrots, lettuce, tomatoes, corn, red peas, cassava, yam, mangoes, pears and oranges; and prior to hurricane Sandy, had large quantities of bananas and plantains. They also raise cows, goats, sheep, ducks, turkeys, geese, and peacocks and from time to time import exotic birds such as pheasants and quails.

The institution also has a contract with Caribbean Broilers, and has been producing poultry for the company since 1994.

“At any one time, we can do 12,000 birds, depending on the time of the year,” explained the school’s farm manager Robert Henry.

“It is an all-in-all-out system, meaning we get chickens from them, we get feed from them, and we get expert advice. We provide the housing, the equipment, the labour force and we ensure that the performance indicators are met,” he said

The meat company generally collects the birds every six weeks and grades the institution based on its performance.

“What we have done for the last three to four performances is that within our group, we have come first and we are the only school in that group; we are the only school with natural houses or open side houses and we are competing with people with the improved technology which is called the tunnel ventilation technology. As a school we are doing very, very well,” he said.

Dinthill also boasts a piggery with a 13-sow unit and a slaughter house and is therefore able to provide pork for the school’s canteen, members of staff, other institutions and the general public. The school is also able to sell as much as 2,000 pounds of pork in December to members of the public. Approximately 60 per cent of their piglets are also sold as weaners to farmers within the community year-round.

On entering the school, it’s hard to miss the 2,800 square foot greenhouse that has been reserved for the planting of green peppers and tomatoes. Nestled in the confines of this protected space, the produce are guarded against the external forces and pests, and the growth and development of the plants are monitored by students and staff.

It seems the school is never short on ideas and one of the latest ones is the creation of an hydroponics system which will allow students to grow plants in water where fish are also raised. The project is being done in collaboration with INMED which receives funding from USAID.

“The fish will be in the ponds and the waste from the fish will form nitrate and will be pumped from the pond on to the grow beds where the vegetables are grown. The plant will extract the nitrates and other nutrients, oxygenate the water, and send it back to the fish,” said Henry.

Students from both the engineering and agricultural science departments form most of the labour force for the project, although help is also sought from external professionals.

“What we do is that we tie it (the project) in with their practical session, so if they are assigned for three sessions on a given day, those practical sessions are slated for their work on the project, but their sessions in class will still be attended to,” explained the farm manager.

The school’s success in agriculture was put on display last week during their annual agricultural show. The event is in its 10th year and has seen scores of people and companies intimately connected with the sector showing their support. The event also received sponsorship from the National Commercial Bank in Linstead, Trade Winds Citrus Limited and Freshh.

“We have decided to support Dinthill which epitomises what we need to do in this country from an educational standpoint and from the standpoint where we need to be supporting and feeding ourselves,” said the bank’s manager Dean Simpson.

This year’s agriculture show was one with a difference from all accounts, because while there was the usual booth displays from various companies, Dinthill, for the first time, also hosted a farmers’ market where ground provisions were sold at discounted rates to patrons of the event.

Dinthill is also usually flocked by students from other primary and secondary schools, especially those who are doing their School Based Assessments in agricultural sciences. Several of the school principals have also made arrangements for their students to be given tours of the school as well.

“Since this term, we have had about 15 tours already,” explained Fearon. 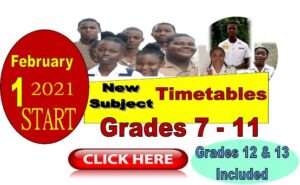